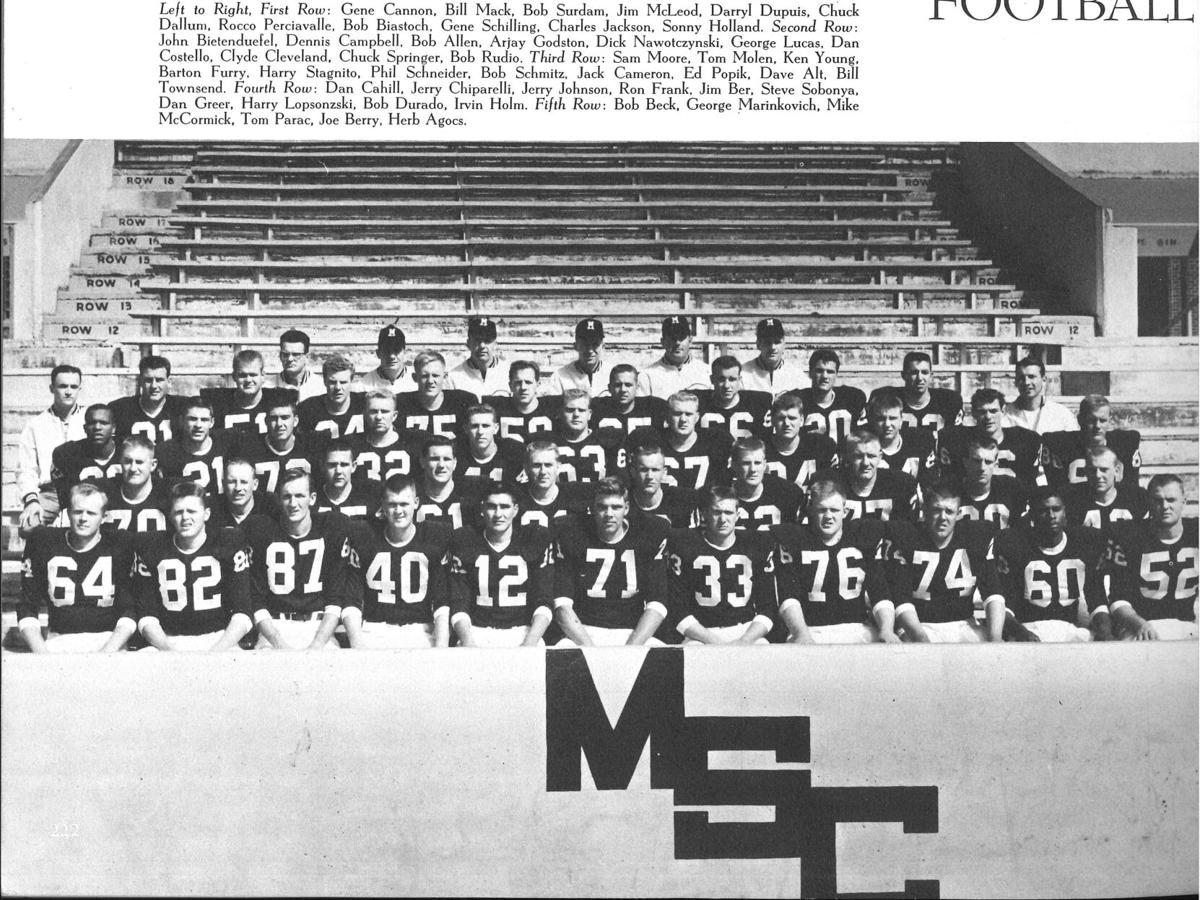 The 1959 Bobcat football team poses for a portrait. Dupuis (#12) was sitting in the first row. 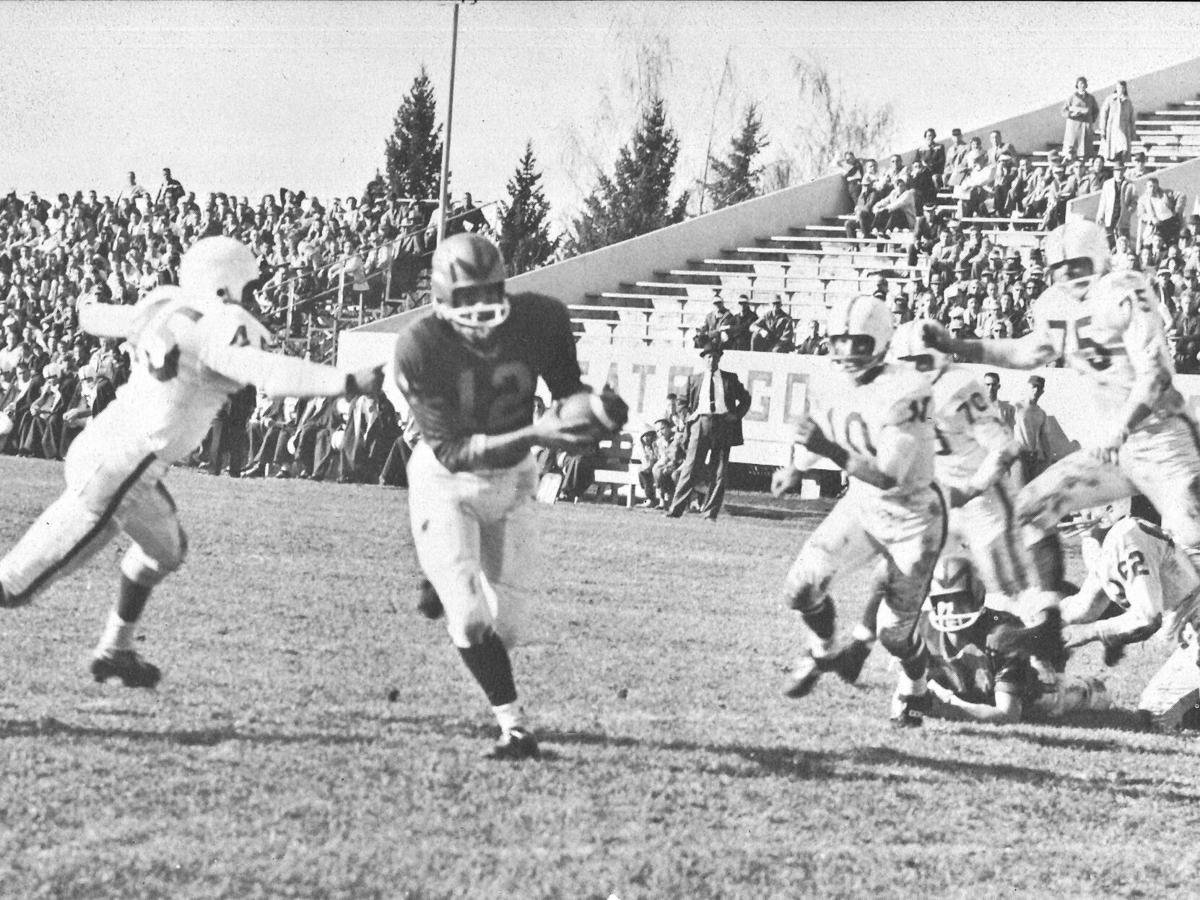 Dupuis carries the fooball through pressure during a 1959 Bobcat game.

The 1959 Bobcat football team poses for a portrait. Dupuis (#12) was sitting in the first row.

Dupuis carries the fooball through pressure during a 1959 Bobcat game.

In just over a week, Bobcat football will face off against the Montana Grizzlies for the first time since 2019. The storied rivalry between MSU and UM dates back to 1897, when the two universities were just four and two years old, respectively. Since then, The Brawl of the Wild has evolved into a tradition that holds the attention of the entire state for one Saturday a year. Both schools have enjoyed periods of dominance over the course of the rivalry, as with MSU’s current four-year win streak. Most of the rivalry’s recent history is familiar to Bobcat football fans, but the Brawl was just as rowdy in 1958 when Darryl Dupuis led the Cats to a 20-6 victory in Missoula. To hear a first-person account of the game, I spoke with Dupuis about his days as a Bobcat quarterback.

Dupuis has a clear, steady voice. His ability to recount specific plays from his time as a quarterback makes it easy to imagine how he might have picked apart opposing defenses with his sharp thinking. “The coaches always built up the enthusiasm,” Dupuis said of the Cat-Griz game. “They said ‘This is the game of the year. All the others were just preliminary.’” Dupuis grew up in Polson, Montana, and played quarterback in high school before joining the military. Once he completed his military service, Dupuis decided to take his athletic talent to college. “When I decided to go to Bozeman, I had a lot of support in my hometown because we have a lot of Bobcats there,” Dupuis said.

When Dupuis started at quarterback against Montana for the first time in 1958, the Cats had won two rivalry games in a row and were looking for a three-peat on a chilly fall day in Missoula. “It was in the 20s, temperature-wise, at game time,” Dupuis recalled. The game would prove to be a low-scoring, hard-fought contest. When the final whistle blew, Dupuis had helped the Cats secure a third straight Brawl of the Wild victory. “That was really a brawl,” Dupuis said, “When they talk about a Brawl of the Wild, I think that was really a highlight.” The Bobcats would defeat the Griz for a fourth consecutive year in 1959 with Dupuis leading the team once again, in Bozeman this time. “That game we just blew them away,” Dupuis says, “We intercepted five passes.” The Cats would crush the Griz 40-6, a final statement for the seniors on the team who had won all four of their Cat-Griz matchups. “They were just no competition for us that year,” Dupuis said.

While Dupuis led the battle on the field in ‘58, the opposing student sections waged their own war in the stands. The epic confrontation started when UM students decided to park a manure spreader directly in front of the Bobcat cheering section. “As the game progressed, it was sitting there, and then in the second half, students started going down there and peeling off the cowpies and flinging them into the crowd,” Dupuis recalled. When the game ended in a Bobcat victory, the students decided they wanted a souvenir to remember their triumph. “The Bobcat cheering section went down to the goalpost in front of the old men’s gym and started shaking it.” Despite Missoula police showing up to spray the rambunctious fans with a fire hose, the goalpost was freed from its foundation and taken for a walk. “They marched it down Higgins Avenue in Missoula,” Dupuis said, “Some of our players were just itching to go out there.”

As the state of Montana gears up for Cat-Griz 2021, Bobcat football continues its dominance of the Big Sky Conference. The Cats have a perfect 6-0 record in conference play and are tied for first place with Sacramento State, who are also 6-0. Since losing to Wyoming in week one, the Cats have won eight straight including a monumental road victory over Eastern Washington on Saturday, Nov. 3. The Cats led 16-13 at halftime, and a scoreless third quarter set up a nerve-wracking final period. Bobcat running back Isaiah Ifanse broke away from the Eagles’ defense for a 43-yard touchdown early in the quarter, but a fumble on the Cats’ next possession allowed Eastern Washington to whittle the lead down to three points with about seven minutes to play. The Bobcats’ defense was stellar in the final minutes, as it has been all season, and the Eagles were unable to tie the game. The 23-20 triumph on the red turf in Cheney is certainly the most meaningful win of the Cats’ season so far.

The Cats will face Idaho this Saturday at home and will look to close out a perfect regular season on home turf. The Vandals’ defense has struggled this year, giving up 71 points to Eastern Washington in week seven, and the Cats will try to find the end zone early and often. The Cats will then travel to Missoula the following week on Saturday, Nov. 20, for the Brawl of the Wild, hoping to capture their fifth consecutive victory. Wrangling the Griz will be no easy task, though. Montana has a strong team this year, and a week one victory over Washington indicates a high ceiling for the Grizzlies’ potential on any given Saturday. At kickoff, no records, stats or streaks will matter. As Dupuis said, “[The players] all look forward to this rivalry. They know the records go out the window, that anything can happen in this football game.”

The Brawl of the Wild will take place in Missoula this year, but Dupuis will be watching the game from his wintertime abode in Arizona. “We have a party here in Yuma,” he said. “Everybody around — Bobcat or Grizzly — they all go to the same area.” As for his prediction for this year’s game? “I always predict that the Bobcats are gonna win the game, and I know this year is gonna be a pretty close one. We’ve got four in a row, so why shouldn’t we go for number five?”