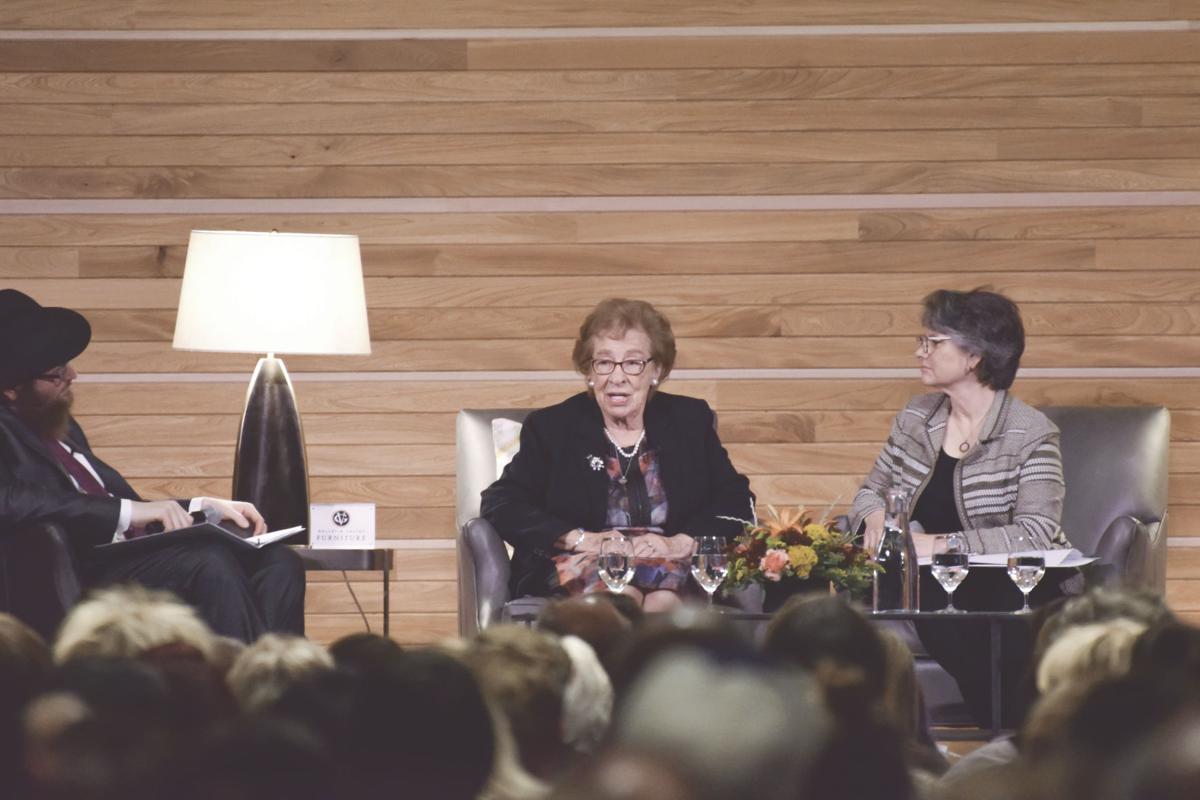 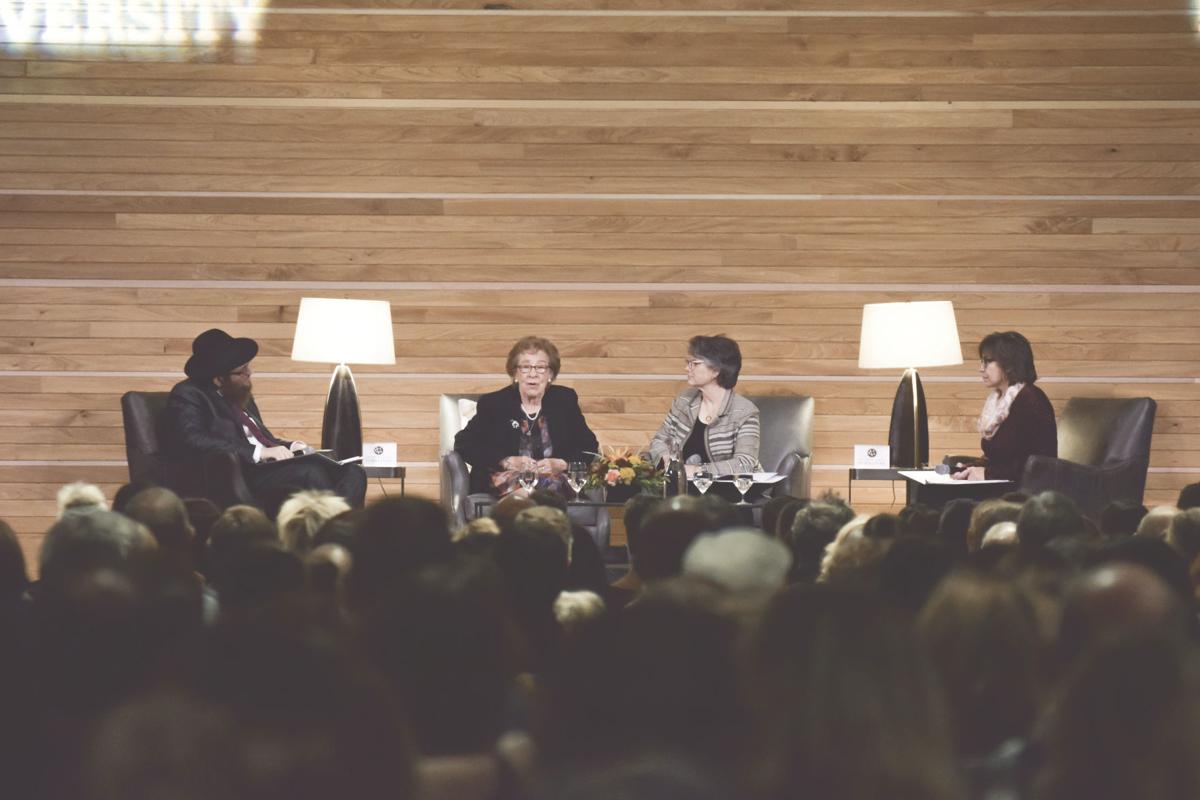 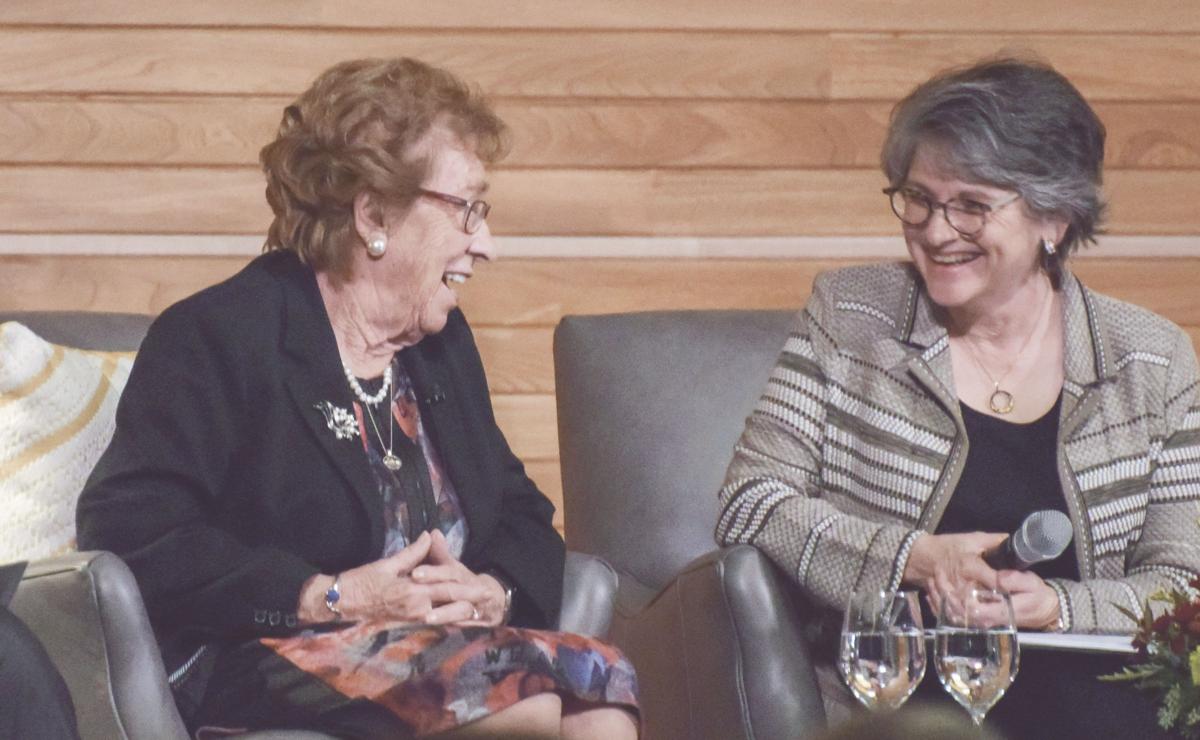 Experiences of the Holocaust echo in today’s society. While the repercussions of pain and death are recognizable, so too is the legacy of human kindness and cooperation.

On Sunday, Nov. 2, MSU had the honor of hosting Eva Schloss, a Holocaust survivor and stepsister to Anne Frank. The MSU Leadership Institute and Chabad Lubavitch of Montana partnered to bring Schloss to MSU to share her experiences with the Bozeman community. Schloss is an international speaker, teacher, and humanitarian who advocates for peace and love across the globe. Her story is incredibly inspiring and reminds us that “love is all that matters.”

The event was set up in a question-and-answer style. Schloss gracefully ascended a small set of stairs and took a seat onstage alongside President Waded Cruzado, Rabbi Chaim Bruck, and graduate student Barbara do Amaral. With one question, Schloss’s words began to flow. Throughout the night, she was eager to tell her story and share not only of the horrors of her past, but also her firm belief in the essential goodness of human beings.

Schloss was born in 1929 in Vienna, Austria. She grew up in Hitler’s Europe and migrated with her family to Belgium, then Holland in 1938. In Holland, Schloss met Anne Frank and her father Otto. The two became fast friends, even though Anne was a “chatterbox” and Schloss “didn’t talk that much.” In 1942, Nazi Germany invaded Holland, and the Schloss family went into hiding. Schloss never saw Frank again.

Schloss recalled how she was sent with her mother to a safe home while her father and brother had to go to a different house. She was afraid and desperately missed her family, but she stayed quiet with her mother. However, a woman was blackmailing her father and brother, and the two had to escape from their safe home. A Dutch nurse offered up a new safe home, to which the Schloss men traveled. The safe house was close to Eva and her mother. For a short while, the family was happy, and they were able to spend time with one another.

On Eva’s 15th birthday, a knock came at the door. Since Nazis never raided houses in the morning, the Schloss family thought that they were safe, and they opened the door. The Nazis stormed the house and captured the Schloss family. The Dutch nurse had betrayed them, and Eva and her family were sent to the Auschwitz-Birkenau death camp in May 1944.

Schloss said, “The whole point of the process was the de-humanization of us.” At the camp, Schloss and her mother were separated from her father and brother. They worked 18 hours a day, slept very little, and were fed only scraps of bread and water. The barracks were lined with thin cots stacked up in threes, and there were no toilet facilities. Instead, the inmates were only allowed to use the toilet in the morning and evening, and they were forced to walk between five and 15 minutes. There was nowhere to wash, and hygiene was nonexistent. The inmates received a shower to delouse once per week, but disease ran rampant, and people suffered unimaginable horrors.

Eva and her mother spent nine months in the death camp. In 1945, the Russian army liberated Auschwitz-Birkenau. Eva and her mother survived Auschwitz-Birkenau, but her father and brother did not. The pair was evacuated eastward into Russia and later repatriated to Amsterdam. Schloss resumed her education, studied History of Art at the University of Amsterdam, and moved to London in 1951 to work as a professional photographer. She married Zvi Schloss in 1952, and her mother married Otto Frank, the widowed father of Anne Frank, in 1953. Schloss then ran an antique shop in London for two decades.

However, the next several years were not easy for Schloss. She carried hatred and bitterness in her heart for much of her adult life. She remembers how Frank considered himself a German citizen and refused to hate Germany, which confused her for a long time. While she has now let go of much of her hatred, Schloss still does not understand how Frank was so forgiving of Nazis.

Almost 40 years after the Holocaust, Schloss began to tell her story. She became increasingly involved in Holocaust education from 1985 onward and received an honorary Doctorate in Civil Law from the University of Northumbria. She also became a trustee of the Anne Frank Educational Trust, U.K. and published a memoir entitled Eva’s Story in 1988, wherein she shared her experiences as a Holocaust survivor.

Schloss has published two other books, “The Promise” and “After Auschwitz,” both of which continue to tell her Holocaust experiences and elaborate on the need for peace and love in the world. She also worked with playwright James Still to create the play And Then They Came for Me: Remembering the World of Anne Frank, an educational play that discusses the Holocaust.

Today, Eva continues to share her story with the world. Her speaking engagements focus on an unvarnished, courageous examination of her Holocaust experiences and what they mean for humanitarian efforts today. Her message for the MSU community is to remember that “we are all human beings...hate doesn’t get you anywhere.” She instructed the audience to be tolerant and loving of one another. Schloss criticized the actions of “cowards and bystanders” in Nazi Germany and told the audience that, “We live in a democracy. When we see something happening, we need to speak out.” In this time of division and hatred, there is nothing more valuable than recognizing the essential goodness of humans and the importance of loving one another with an eye to protecting the innocent.