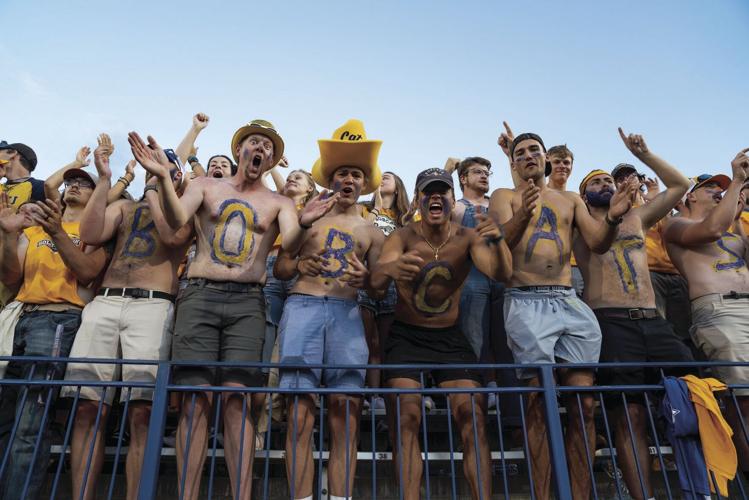 Painted Bobcats cheer on the MSU football team at its Gold Rush game on Saturday, Sept. 3. 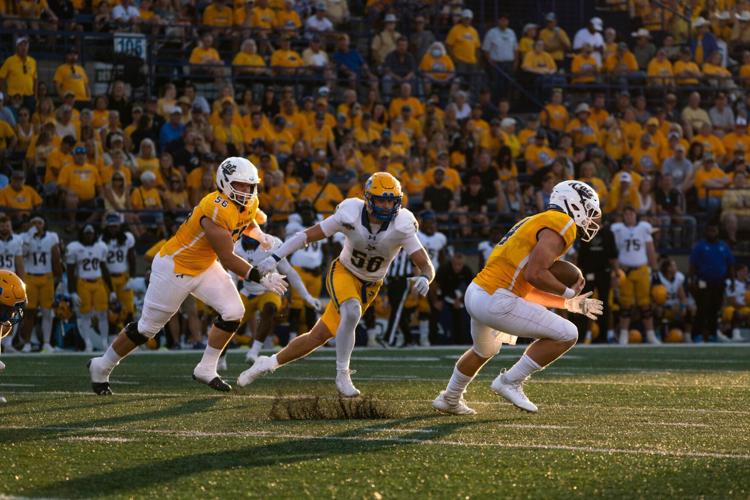 Quarterback Tommy Mellott runs down field in attempt to score. 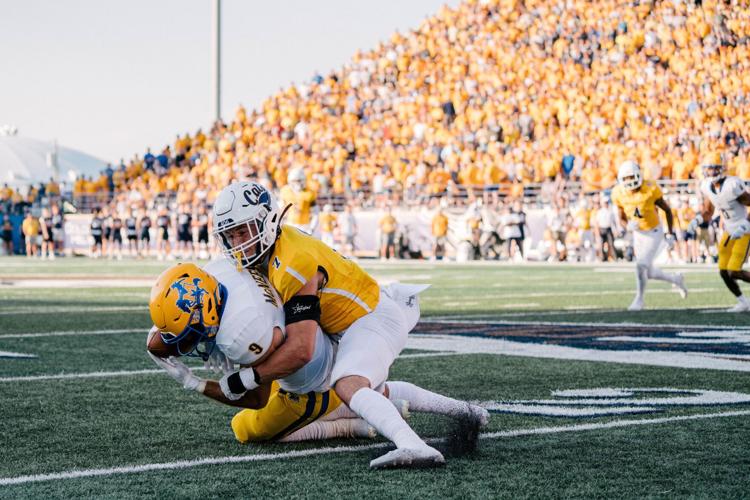 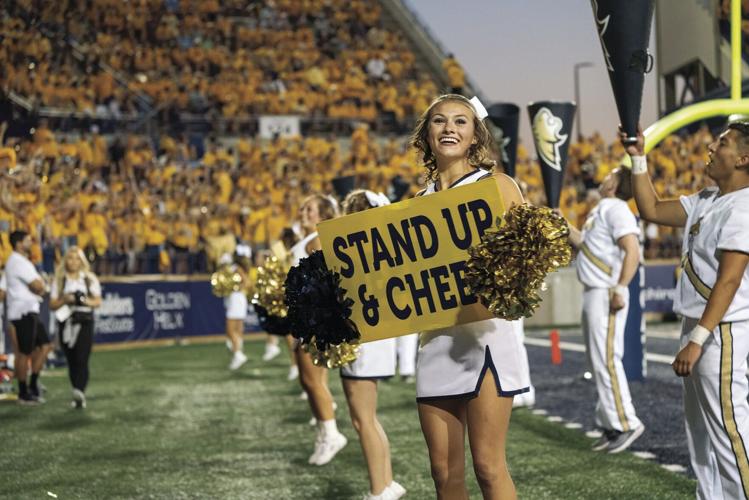 The MSU Spirit Squad riles up the Gold Rush crowd.

Painted Bobcats cheer on the MSU football team at its Gold Rush game on Saturday, Sept. 3.

Quarterback Tommy Mellott runs down field in attempt to score.

The MSU Spirit Squad riles up the Gold Rush crowd.

For the first time since December, Bobcat stadium roared to life on Saturday afternoon as MSU football kicked off the 2022 season against the McNeese State University Cowboys.

Despite the sweltering heat, the Bobcat’s kept their cool as their offense stalled throughout the first quarter, failing to put any points on the board. The Bobcat’s first drive of the season lasted three plays before they were forced to punt the ball away after the McNeese defense hunted down MSU quarterback Tommy Mellot for a sack on third and short.

On its second drive of the game, MSU appeared to find a way through the Cowboys’ defensive line as running back Lance Sumner broke away for a 52-yard sprint to the end zone. During the play, a holding penalty on the Bobcats negated the score and MSU was forced to punt just two plays later.

On their last drive of the quarter, the Bobcats began to find their rhythm, putting together a solid drive that left them at the McNeese third yard line heading into the second quarter. The Cats quickly earned their first points as backup quarterback Sean Chambers punched through the Cowboys’ defense for a three yard score.

McNeese State responded quickly with a touchdown of its own, but once the Bobcats offense began to click there was no slowing them down. The Cats put up 13 combined points over the course of their following three possessions, leaving McNeese down by 10 early in the third quarter. MSU would score on all but two of their remaining possessions, managing to finish the game with 40 points and a resounding victory over the visiting Cowboys.

The Bobcat defense remained solid throughout the game, forcing a fumble and snagging two interceptions while allowing only seventeen points and 303 total yards of offense. Additionally, the MSU defensive line had no trouble fighting its way through to opposing quarterback Knox Kadum, recording six sacks over the course of the evening. The stout defensive effort from the Cats bodes well, especially since Big Sky Conference rivals University of Montana and Sacramento State put up 47 and 56 points in their respective week one matchups.

As always, the first home game of the season at MSU is marked by Gold Rush, an annual celebration welcoming students and fans back for a new season of football. What was launched as a t-shirt promotion in 2007 has grown into a beloved tradition that turns Bobcat stadium gold for one magical Saturday in September. “It’s an incredible time. We’ve got the best fans in the nation, we’ve got the best stadium in the nation, it’s just such a blast. I’m looking forward to it,” said Ty Okada, MSU senior safety. The Cats have come away victorious in all but one Gold Rush matchup, a remarkable record that fans hope to see continue in years to come. As is custom for Gold Rush, the signature t-shirt features a graphic created by the winner of the annual Gold Rush t-shirt design contest. This year’s winner, Jamie Shanks, is a Montana native and her son Elliot is a freshman at MSU.

“When I began the design, I wanted to include the mountains, as they were one of the many favorite things about our visit. I also wanted to capture the elements of Bobcat football through the yard lines and the subtle football outline with bobcat scratches marking the laces,” Shanks said.

As MSU football embarks on another mission to bring home a national championship, fans are quick to recall just how close the Cats were to glory last season. MSU held a 10-2 record heading into the FCS playoffs and earned a bye to the second round of the tournament. The Cats made the decision heading into the playoffs to bench Matthew McKay, who had started at quarterback every game of the regular season, and give then-freshman Tommy Mellott the reins. Mellott performed phenomenally, guiding the Bobcats to a National Championship game while collecting 10 total touchdowns over the course of three games. But in a gut-wrenching moment just minutes into the championship game, Mellot was tackled awkwardly as he fought for first down yardage, tearing a ligament in his ankle. Without Mellott, the Cats struggled to produce offense, falling to the Bison 38-10.

In the offseason MSU lost one of the most impactful players in program history to the NFL. Linebacker Troy Andersen was selected in the second round of the NFL draft by the Atlanta Falcons, a testament to his incredible talent and athleticism on the gridiron. The Cats will have to adjust to life without Andersen, and younger players will need to step up and fill the gaps. “Some of the things we asked Troy to do because of his unique talents, we just won’t ask the next guy to do,” MSU Head Coach Brent Vigen said. “You know you can’t replace him so you don’t ask the next guy to do the exact same things.”

With the Cat’s championship quest underway, obstacles begin to loom in the distance. MSU begins its Big Sky Conference schedule on Saturday Sept 24th against Eastern Washington followed by a tilt with UC Davis the next week. Eastern Washington is ranked 12th nationally and UC Davis is just outside the top-25 after a week one loss to UC Davis. These two matchups will give Bobcat nation a solid gauge of the team’s standing in the Big Sky Conference and the FCS as a whole. In the final game of the regular season, the Cats will host the Montana Griz in the highly anticipated Brawl of the Wild. The Bobcats held the Great Divide Trophy for four seasons before the Griz snatched it back in a 29-10 thumping in Missoula last November. The Griz are ranked third in the nation, just one spot higher than the Cats, potentially making the Brawl of the Wild one of the highest powered and evenly matched games in the upcoming FCS season.

With one game under its belt, MSU football appears ready for another successful season. As Mellott continues to impress as quarterback and the MSU defense holds strong, fans can look forward to a thrilling year of Bobcat football, while the Cats themselves enjoy another year of golden crowds willing them to victory in the shadow of the mountains.