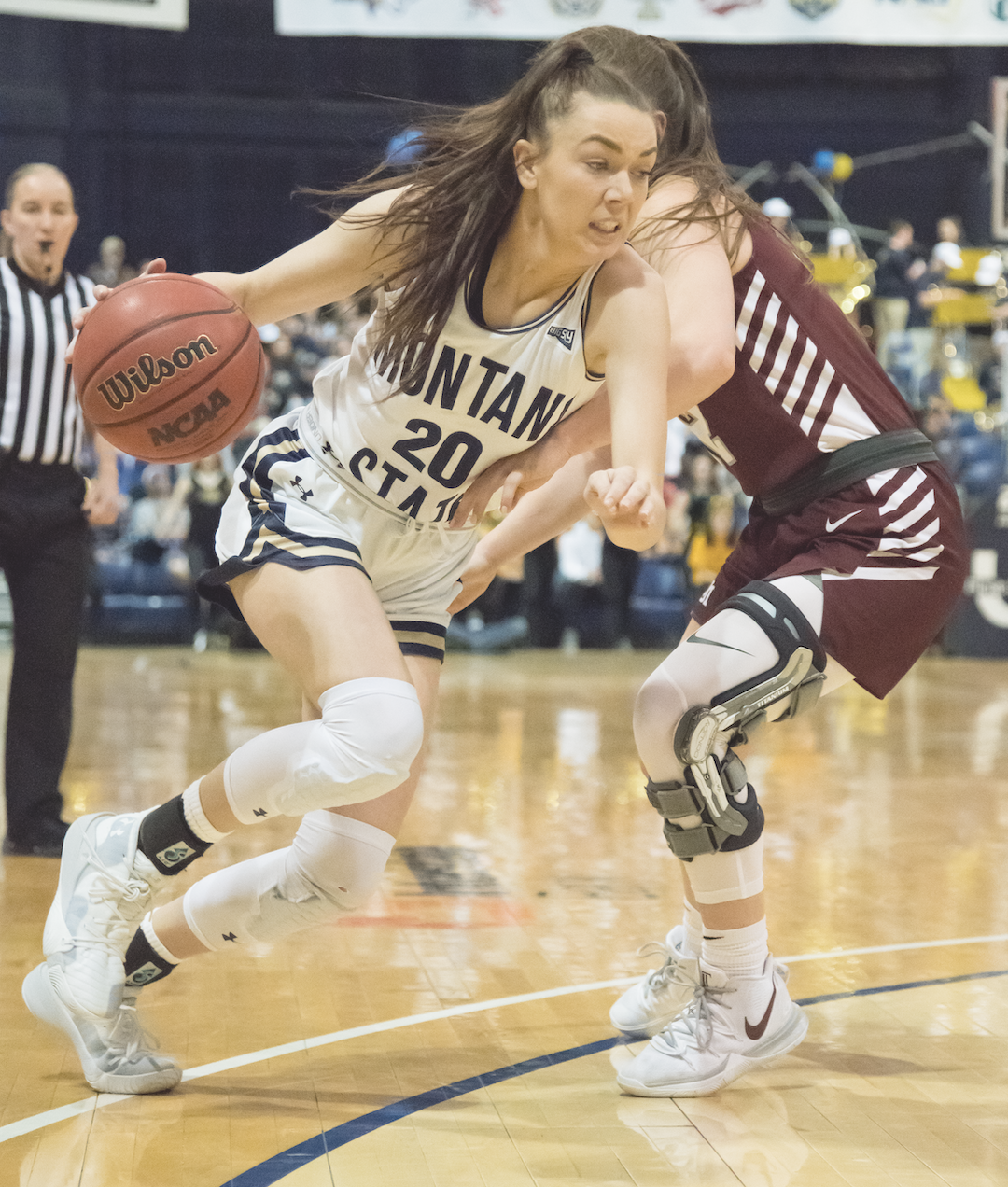 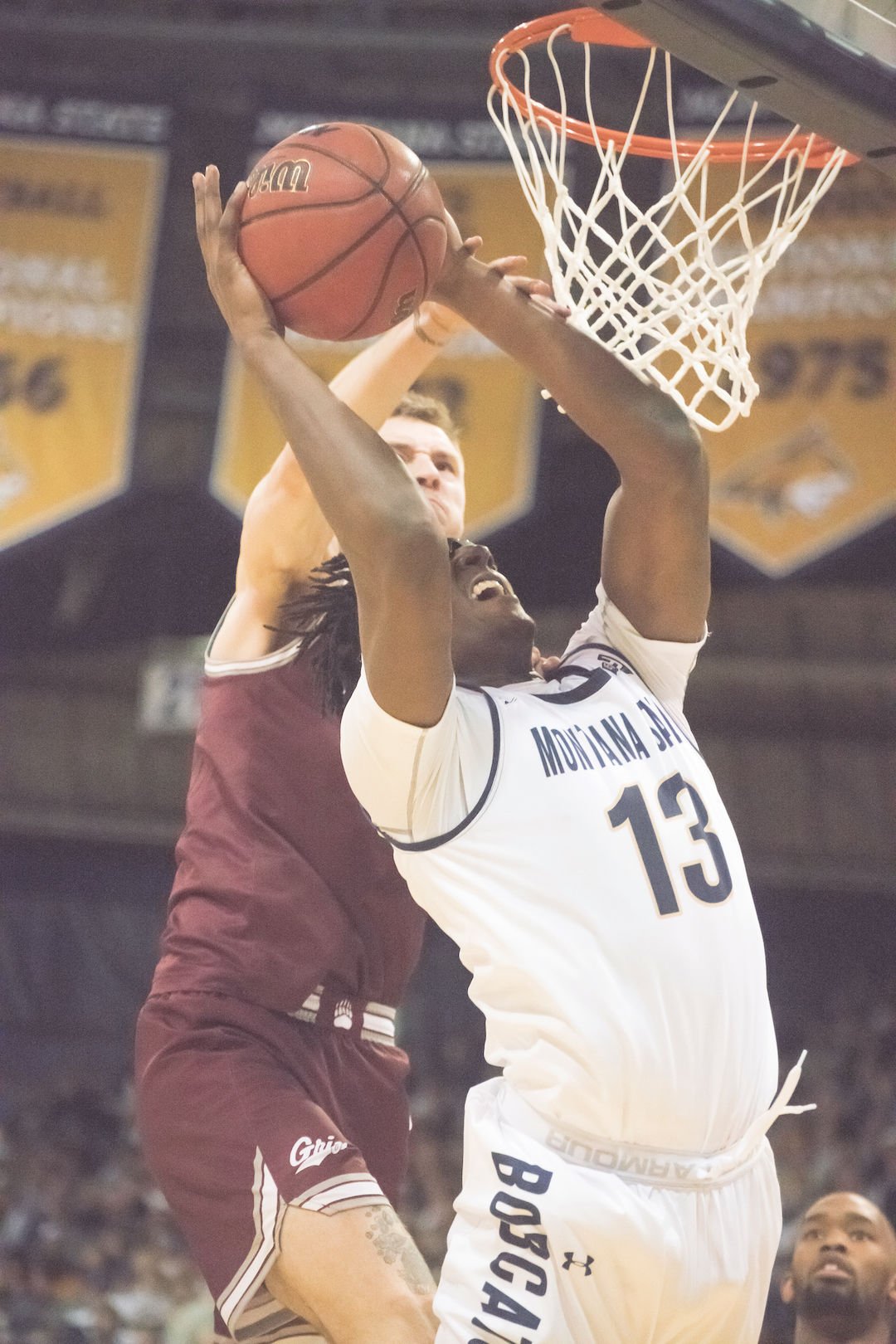 The women triumph, the men are stifled and a student goes viral. This year’s edition of Cat-Griz basketball brought plenty of excitement to the Brick Breeden Fieldhouse. On Saturday, Feb. 22, the women clinched the Big Sky Conference Championship with a dominant 92-78 win and the men fell short 54-59, but senior film and television production major Joe Thompson stole the headlines. At halftime of the men’s game, Joe had 60 seconds for the Montana Rib and Chop House $11,111 challenge to win $1 for making a layup, $10 for a free throw, $100 for a three-pointer, $1,000 for a half-court shot and $10,000 for a full-court shot. He cruised through the gauntlet with near perfection, leaving himself with 45 seconds to make a full court shot. As the clock neared zero, Joe side-arm heaved his last attempt and banked it perfectly off the backboard. The nearly sellout crowd erupted! It was by far the loudest I’ve ever heard the Brick this season. In celebration, Joe ran around the court, high-fiving everyone in sight and even throwing up a 2-4 for the camera in honor of Kobe Bryant. The video caught traction on social media and currently has over 3 million combined views online. See page 7 for the interview that Cameron Graves and I had to catch up with Joe to discuss his iconic moment, detail his hectic schedule of interviews since the magical moment and highlight how he plans to use his new found fame for good.

The women led by as many as 25 points in the fourth quarter on the way to a 92-78 victory, extending their winning streak to 11 games. The Cats led from start to finish, completing the season sweep of the Lady Griz. Once again, the Cats featured a balanced scoring effort with six players scoring in double-figures. Senior forward Fallyn Freije led the way with 18 points on 8-11 shooting to go along with a team-high 8 rebounds.

Even with four games left in conference play, the win sealed the Big Sky Conference Championship for the women, allowing for a moment of celebration in front of the fans. In the women’s third regular season championship in the last five years, their enthusiasm and consistent effort led to a memorable confetti drop and net cutting.

This week, the women host their final two home games of the season on Thursday, Feb. 27 at 7 p.m. against Sacramento State and on Saturday, Feb. 29 at 2 p.m. against Northern Arizona. Come out and enjoy some fantastic basketball by this year’s Big Sky Conference Champions. Entrance is always free for students with CatCard.

In an ugly barnburner at the Brick, the Cats, who now sit at 14-13 overall and 8-8 in conference play, failed to keep pace with the Griz, falling 54-59. They shot a mere 35% from the field, including a 3-20 performance from the three-point line. A late run gave the Cats hope, but much of the game was controlled by the defensive pressure from Montana.

"They were there on every catch," said Head Coach Danny Sprinkle. "They would double Harald and they would full rotate. They'd even have their five man coming out to Ladan in the corner, and he was there every time. They were on point. They were sharper than us defensively, I don't even have to watch film to say that."

The Cats were led by senior guard Harald Frey with 18 points, but ultimately poor shooting plagued both Frey and his teammates. Despite the loss, the Cats showed great effort and the 6,570 rowdy fans in attendance made for an electric evening of hoops.

The men this week travel to Sacramento State on Thursday, Feb. 27  and to Northern Arizona on Saturday, Feb. 29. Both games are crucial for seeding come tournament time. The games can be streamed for free on PlutoTV. The Cats’ last two home games will be on Thursday, March 5 at 7 p.m. against Southern Utah and Saturday, March 7 at 4 p.m. against Northern Colorado. Go Cats!